They say that tradition is forged in time. In the case of this visit, one could say that the tradition of making good wine and mellow liqueurs is cast out in a family name that has been known for over two centuries for its mastery. My photographer, Jordi, and I are dropped off by the bus from our tour of the Rude valley straight onto Samobor´s main square. At the very first corner on the western side, my photographer warns me about a sign hanging over an ancient wooden portal. I check my smartphone, and shriek when I see three missed calls. I didn´t hear it buzz from the noisy bus. Yes, we´ve been running half an hour late, and I hate being late anywhere. I take a look at the plate reading “Filipec” and “Bermet” hanging over the door. Yes, we reached our destination.

We knock on the heavy double-winged doors, but hear no answer, and decide to pull the left ajar, only to find ourselves in a walkthrough area, which connects the ancient house with the backyard. My photographer decides to wait, I however take the courage to walk into the backyard, where I´m welcomed by a smiling senior gentleman, who can´t wait to ask where the problem with my engine is. 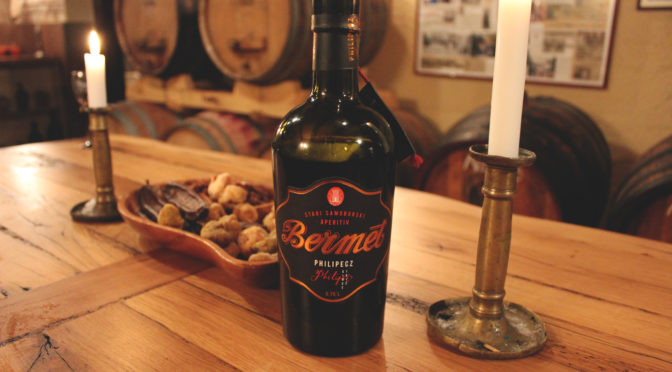 “Engine?” I take one step back, only to realize that the man is joking, but also can´t miss to notice all the cars in his backyard. “No! I´m here for the Bermet”, I exclaim, not exactly knowing what Bermet actually is. “Oh, you´re here to see my nephew.”, the man points to the picket fence which divides his property from the next one. He opens the tiny gate and calls for Anton. And again, a young, but seemingly busy man walks out to shake hands with us. He seems irritated by our delay, and I really wish to sink into the ground, especially after being told that he cancelled his business trip to meet us. He swiftly walks us into his wine cellar, which consists of two rooms, connected directly with the tiny store. He pulls out three shooters and the pièce de résistance – a bottle with a fancy label in red fraktur (old German font) writing simply Bermet. The now seemingly relaxed host, pours the dark red liquid into the shooter glasses and the story begins…

Bermet is not just a liqueur. It´s a specially aromatized wine, which is served either as an apéritif or digestif, that consists of darker grape sorts, carobs, dried figs, dried cranberries and about twenty different herbs, which are all macerated and kept for three months in oak barrels to ripe. Bermet tastes much like vermouth or any bitter herb liqueur, but the taste of wine can´t be missed. Since the alcohol contained is at 14 per cent, it is not as intense as Jäger for example, yet it´s as spicy as Amaretto or Campari. No wonder it was considered a special treat for Christmas, and drunk only by the higher classes. Some sources even claim it was on the dinner menu on the S.S. Titanic. It is known for sure that Bermet was served on many royal courts, like those in Vienna, Budapest and Venice. The oldest written trace mentioning the “remedy for ill stomachs” can be found in the local museum in the church books from 1755.

I have to wonder: how does one come up with the idea to mix wine and dried figs? Our host, Anton Filipec, explains. His family was in the leather manufacturing business for decades, but after WWII, the authorities confiscated the entire shop, due to restrictions and regulations with which the state wished to control the leather production. Since the family has been in possession of a vineyard for over two hundred years, and have been producing wine for their own needs, Anton´s grandfather, Josip, decided to give it a try, and start a serious wine business. And it took off pretty well. Today Anton employs four workers, and sells top class wines and liqueurs to specialized delicatessen stores across Croatia, as well as some smaller wine markets and the largest Croatian supermarket chain. A large part is bought by top class hotels as well. There is also one store in Slovenia that sells the spicy Bermet.

Along with the aperitif, we are served some crackers with an oily, brownish topping called muštarda (basically, it´s a sweet-hot sort of mustard made after French recipe). The aroma is very intense and one cannot ignore the horseradish that fires up the taste buds once one takes a bite. Muštarda is the second, well-known, brand of the Filipec family, made by Anton´s uncle, who agreed to continue the production, according to the grandfather´s last will. It is best served with winter roast, game and grilled sausages. I ask about the annual amounts of wine the Filipec family produces, and Anton happily responds, that they make only a couple of thousands bottles of wine and bermet per year, though he plans to expand one day.

Then we are served a cooling Pinot Grigio from 2015. I am stunned that it´s not sour, as most whites are in the region. Also, the restrained flowery note is an absolute surprise for the nostrils. After that, we are given two coupages for a try, which the proud vintner named after his two children. The first, Cuvee Roko (named after Anton´s son), is a coupage of cabernet sauvignon, pinot noir, zweigelt and lemberger, all of which are kept separated for a year in barrique barrels, and then kept bottled for another year. I am surprised by its very steady aroma. The first word to cross my mind, after having tried it is – dignity. The second is Rosé Tia (named after our host´s daughter). It consists of several sorts of lemberger and is, as expected, sweet, but goes well with the crackers and mustard we had.

I learn that the Filipec estate also makes chocolate pralines filled with bermet. Having a sweet tooth when it comes to pralines, I really hoped to try some of those, but we were running out of time and our host was also ready for his next appointment. We are given one final tour of the tiny store, which is covered in family pictures, and a gift bag each, containing a bottle of the before mentioned Bermet. I can´t wait to come home and open the bottle once I make a strawberry cake afterwards.

In Kabola happy with eco Harvest