Perched on sixty metres rock above Sava River and village of Brestanica, the Rajhenburg Castle stands as a spectacular historical attraction of Krško. It is also the first medieval castle mentioned in Slovenian texts from 895. The original castle was demolished and later rebuild by Bishop Konrad of Salzburg in early 12th century. Among many owners of this castle, the Trappist monks stand out. They lived here from 1881 until 1941, and gave a specific gastronomic heritage to this castle. 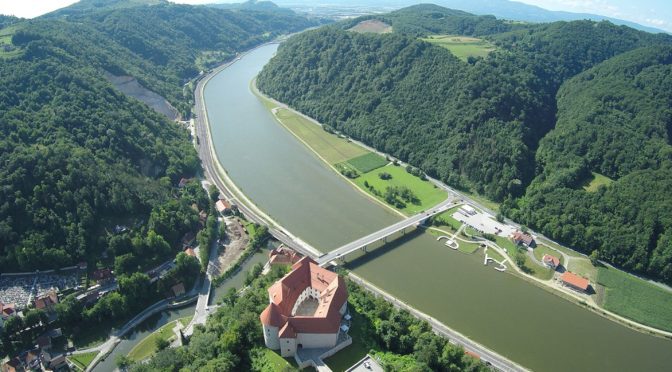 The fort has thick walls and entrance leads to a cobbled square surrounded by white walls of this beautiful castle. The nobility ruled this estate until 1881 when Trappists bought the castle and made a strict monastery. German occupation in 1941 moved the monks out and used the premises for Slovenian refugees. After Second World War, the communist government nationalised Rajhenburg and transformed it into a female political prison. Only in 2004 did Krško Municipality gain the ownership of Rajhenburg and started its renaissance to the present state. 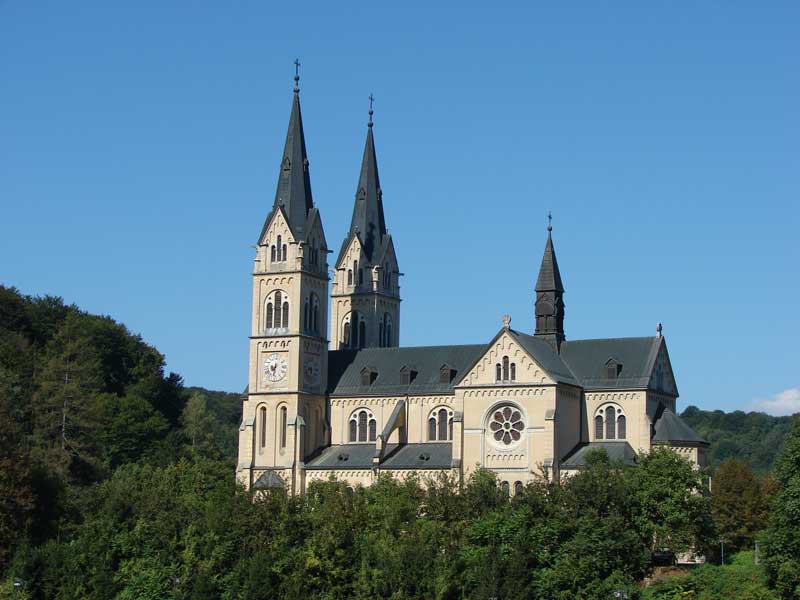 We first got warm with tea and excellent pastry inside the castle cafe, before embarking on a quick one-hour tour of the castle led by knowledgeable Mrs Helena Rožman. Within an hour we were astonished by the development of castle’s architecture, beginning in Romanesque period and travelling through Gothic and Renaissance features until the present day.

Castle is known for its not yet fully explored Romanesque chapel from 12th century and Renaissance chapel from 16th century. Exquisite Renaissance frescos still exist in one room, making Rajhenburg one of the most important Middle Age castle architecture in Slovenia. The scenic position and exemplary interior make the castle ideal for weddings, celebrations, concerts, and cultural events.

The museum inside the castle features the destiny of Slovene deportees and the time when various correctional institutions operated in the castle. Visitors can also see the castle furniture from the collection of the National Museum of Slovenia. Postcards show Brestanica from the end of the 19th century and motifs from the social life in this small and picturesque village that hosts one of the biggest churches in Slovenia, the Basilica of the Mary of Lourdes. The castle also includes exhibited medals from the Olympic games and world championships won by Primož Kozmus, the most famous athlete from Brestanica.

In the home of Silent Monks

The main attraction is, of course, the Trappists. The Order of Cistercians of the Strict Observance (O.C.S.O.) is a Roman Catholic religious order of cloistered contemplative monasticrs who follow the Rule of St. Benedict. They are branch of the Order of Cisterciansand one of the strictest orders in Catholicism. “Silent monks”, as they are sometimes called, came to Rajhenburg from Trappist monastery of Dumb near Lyon and dedicated it to the Mary the Rescuer.

At first only French monks were present, but over time Slovenian brothers entered the monastery. In Rajhenburg they worked for 17 hours a day, of which six hours they spent in prayer and meditation. They were strictly forbidden to talk or even communicate with the body language. Those who have taken the vows were no longer allowed eating meat, fish, and eggs, and they only made Trappist cheese. It was possible to eat this cheese at non-fasting days, making it the only food of animal origin on the monastery’s dining table.

Extensive farmlands in the area were the basis of Trappists’ survival. The monks were breeding cows, horses, pigs, and chickens, whose meat they sold. They cultivated the land, had vineyards and orchards. In 1929 Trappists bought the first tractor in Posavje region and they planted first vine in Sremič, now known as top wine area. In 1896 monks also built first hydroelectric power plant in the area.

One heritage that lasts is chocolate. The Trappists were first producers of chocolate and liqueurs in Slovenia. They imported the necessary machinery from France in 1896, and used the hydro energy of Brestanica brook to produce first chocolate dragees. The Viennese Imperial Court was especially pleased of its quality, so they bought regularly chocolate bars from the monastery. In fact, Emperor and King Franz Joseph gave the honorary title of Imperial, which soon became their brand name. The Imperial chocolate was sold all over Europe. They also produced Cocoa, Trapistin and the Grand liqueur, three kinds of liqueurs, of which some became basis for modern day chocolate wine.

We tried the famous chocolates and chocolate wine in Rajhenburg itself, presented by Lojze Kunej. The family tradition of wine making in Kunej family goes back to the end of the 19th century. In 2013, the production of vines and wine is joined by production of chocolate. The Kunej family partnered with the City museum of Krško and Rajhenburg Castle in the project entitled “The influence of Trappist order on the Posavje countryside, acronym Trapistin” and began producing chocolate products inspired by the Trappist heritage. The chocolate products are produced in the House of Mozer in the direct vicinity of the renovated Rajhenburg Castle.

Kunej’s major product, Chocolat Impérial, is a new beverage based on dark red wine from unique grape variety selection, which can be combined with its gentle tannin with dark chocolate. This is a harmonious fusion, which takes us into the world of sensual pleasure and comfort. It can be enjoyed by itself as an aperitif or with selected snacks or deserts, dark chocolate, truffles, forest berries, nuts, berries and selected gourmet food. The wine is not as sweet as one might expect, mostly because of the high-quality Ecuadorian 76 per cent dark chocolate used to produce it. The wine itself is cuvee of dornfelder, acolon, cabernet cubin, and cabernet dorsa.

But real treat is a newly made wine with white chocolate, Chocolat Imperial Blanc. This unique dessert wine is based on chardonnay, sauvignon, and Laški Riesling, with addition of aromatic white chocolate. The complex aroma gives the feelings and tastes of white chocolate, sherry, vanilla, coffee. Indeed, it is a perfect, romantic, pleasurable dessert drink that goes well with soft and mild chocolates.

The best chocolates for these wines can also be found at Kunej’s manufactory. These are again based on Trappists’ tradition, and you can choose from handmade chocolate candies, chocolate bars, and chocolate round bars. The most difficult part is to try all combinations with a drop of excellent wine.

Autumn on Plates of Doma Tavern