In the early summer morning, while tourists and residents of Kali are still unawakened thinking about their day, there is a great stir in the port of Lamjana. Ships are being prepared, fresh and frozen sardines are being loaded, and the proud tuna fishing boats of the Kali Tuna company are shining in their fullness in the morning sun: Neptun I and Neptun II, and Croatian Success. These scenes are repeated from day to day, but always with some novelty. This time it was our visit to a tuna farm, for which Kali Tuna is known all over the world, especially in, for us, distant Japan.

This company was created in 1996 by Croatian returnees from Australia who brought from that country the technique of cage farming of Atlantic bluefin tuna in the Mediterranean. The same Kali people started a fascinating tuna fishing in Port Lincoln, and all that knowledge was transferred to one of the most important tuna farms in the Mediterranean. Since 2015, Kali Tuna has been owned by the Japanese company J Trading Inc., and after we contacted them, they warmly welcomed us and took us through their sea farm.

We left the bay of Lamjana and headed to the sea passage between the islands of Ugljan and Iž. Here, tuna is grown in cage nets to the desired size. All this is expertly shown to us by Silvijo Strihić, a farm manager who deftly finds a solution to any difficulties encountered during the working day. Given the history of fishing and the connections that the Kali fishermen had in tuna fishing in the Pacific with the Japanese, it's no surprise to come across a Japanese, Mr Jiro Kambe, in Kali, who diligently run one of the largest companies on the island.

Tuna is, of course, important to the Japanese. This fish is so common on the Japanese table that there is always a need to find ever better and ever fresher tuna. Adriatic tuna is, therefore, a real hit in Japan! Mr Kambe tells us that tuna in the Adriatic Sea is rich in minerals and nutrients, and they feed on excellent sardines. "That's why we can provide a globally known and delicious tuna," Kambe tells us, adding that he personally believes that Croatia is the best place in the world for tuna farming.

In the end of the May, large tuna fishing boats go out of Lamjana to the open sea and hunt tuna. This most often takes place around the islet of Jabuka, i.e. in the waters in the middle of the Adriatic. The tuna is brought back to Ugljan and placed in nets that are divided by generations. The tuna farming period is at least 30 months, which is extremely important for tasty tuna, Kambe notes. The Japanese Ikejima method is used to preserve the freshness of tuna. It is an original Japanese technique that paralyzes tuna during harvest and thus preserves its meat until it is transported to its destination. Part of the tuna is also frozen, but the main feature of Kali Tuna is the provision of fresh and high-quality fish. 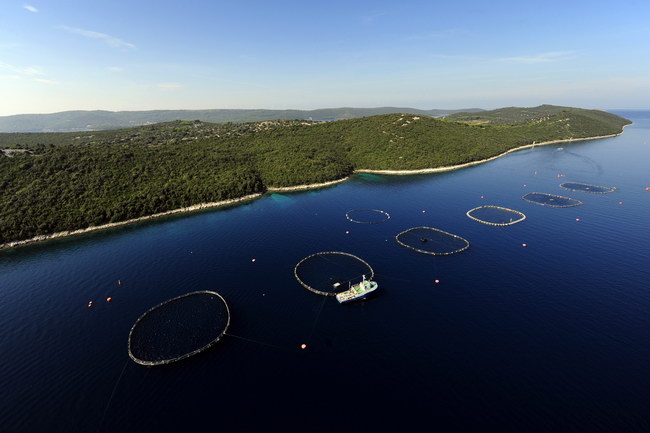 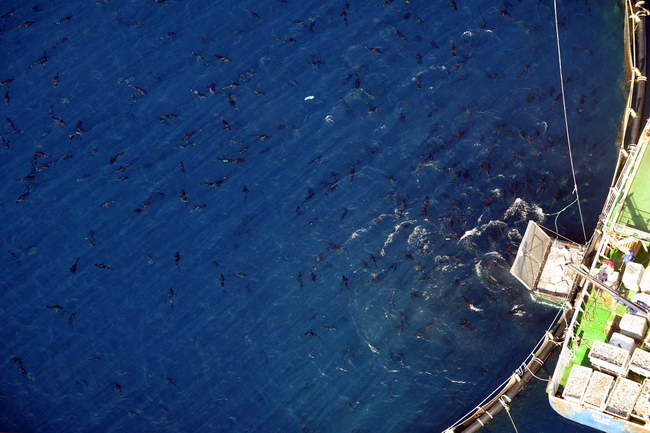 And to make that happen, it takes the skill and attention of Silvio and his fish farm employees. Depending on the generation and season, tuna can be deeper in the sea or closer to the surface, but one thing is for sure: as soon as they hear the sound of the engine, these rather tame fish suddenly start approaching the surface, expecting the most important part of the day: feeding. Tuna is regularly fed five days a week with nutritious sardines, and there are several techniques on how to do it. The easiest and most even way is to fill the crates that stand on the surface and from where the sardines slowly sink towards the tuna, allowing the fish to feed properly and thus controlling their diet. This is the way it is applied to those fish that have already got used to the new life in the nets. 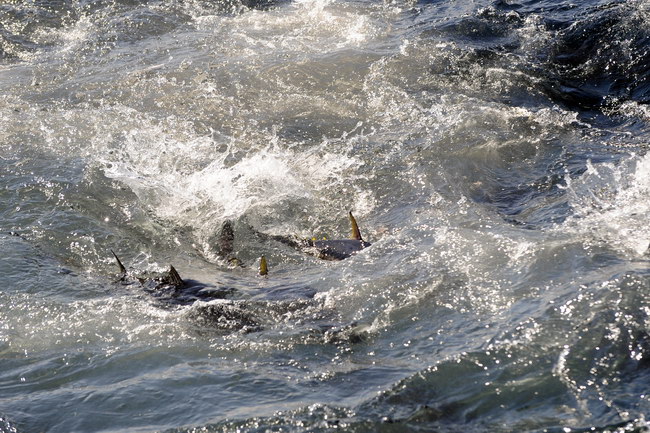 The second way is, at least to us bystanders, more interesting. Sardines are thrown directly into the nets and then incredible predation ensues, where tuna jump on top of each other, and where they compete for a juicy catch. This is how younger tuna are fed, which has yet to learn how to grow properly on the farm. In order for the feeding to be balanced, two boats often dock with the net and then release the fish at the same time. This requires good coordination and a skilled hand, but the tradition of fishing and seafaring in Kali and Ugljan makes its own, so most of the islanders are found on the Kali Tuna boats. They are easy to adapt to working conditions, and even when the southern wind (jugo) and tramontana are blowing, the winds are particularly problematic for the farm area. Fortunately, the farm is also protected from the bora by a relatively high chain of island hills, the highest of which is Šćah with 286 meters above sea level, which rises just above the farm. 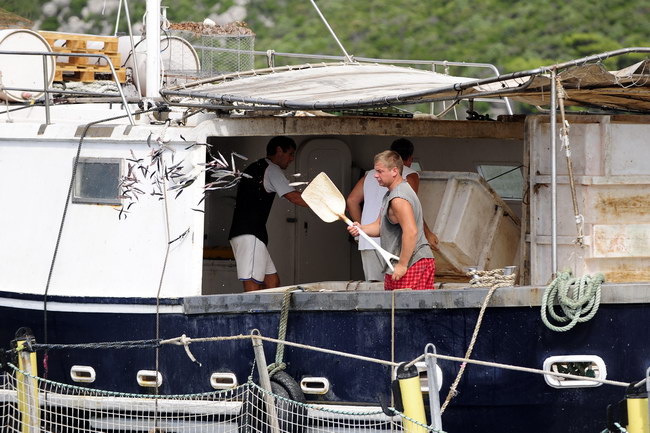 Divers dive into the nets every day. Kali Tuna divers expertly inspect the condition of the nets and everything that happens inside it. Fearlessness is a virtue, it seems to us, as we watch them throw themselves into the sea where monstrosities weighing up to 70 kilos swim. Still, it is not that scary. A lot of employees also dived and swam with tuna, a fish that is quite timid and tame, and that will not "whistle" with its greasy piece on the body of a well-meaning diver.

The nets must also be cleaned of all fouling caused by sea currents. This is done by a special machine that "climbs" on the net and cleans it. It is hard and slow work, but it is not physically demanding. The robot is controlled by gentle movements of the steering wheel, the robot guides the net.

Kali Tuna is known for its approach that requires clean sea, nutritious sardines, and sustainable tuna growth. Kambe tells us that the main guiding thought of such sustainable growth is not to catch too much tuna: “Maintaining the right amount is the key to sustainable growth. Also, not using chemicals is vital for keeping the sea and tuna clean.” This is in accordance with international regulations ICCAT.

In its production processes, Kali Tuna follows the guidelines of the adopted and implemented HACCP quality control system, FSSC22000 and ISO22000. All this process is reflected in the awards, and perhaps most importantly, Kali Tuna is the winner of the Superior Taste Award 2016 and 2019, awarded by the International Taste Institute (ITI) based in Brussels. ITI is the world's leading organization dedicated to testing and promoting superior products in the food and beverage sector. And that this award came in the right hands, we saw for ourselves by visiting the restaurant Srdela Snack in Kali, where the whole story of tuna found its great ending!