Oregon might not lead among top U.S. destinations worldwide, but every foodie on this globe surely knows about famous food markets of Portland. Pacific Northwest in general contains beautiful nature and complex weather. In our project of “Eating Voices”, where we talk to people worldwide, a voice from Portland, Oregon, is dr Staci Martin, the practicum coordinator at Portland State University.

First things first, Staci! Did you ever see the Bigfoot? For those mortals who do not know about it, in North American folklore, Bigfoot or Sasquatch are said to be hairy, upright-walking, ape-like creatures that dwell in the wilderness and leave giant, humanlike footprints. Oregon is said to be one of the major places to meet such a guy.

I have not seen Sasquatch Bigfoot. However, I do have a face mask that honours the big fellow.

Portland is surrounded by fertile farmland and local chefs make the most of the bounty, often letting the week’s farmers’ market hauls dictate their menus. Do you feel privileged living in such a food-oriented town, in comparison to some other places in the United States?

I am very privileged. My inner SE neighbourhood has three supermarkets, two local grocery stores, and several weekend farmer’s markets a bike ride away. But for a lot of folks that live in the Portland area, access to food is limited. We have what is called “food deserts,” that is, “regions where it's hard to find of fresh fruit, vegetables and other healthy unprocessed food” (Peacher, 2013, para. 11). According to the USDA (2019) Oregon is ranked the 20th hungriest state in the USA. This means one in eight Oregonian is food insecure. Communities of colour are disproportionately experiencing hunger and are food insecure (Oregon Hunger Task Force, 2019). In the USA, “more than 37 million people struggle with hunger in the United States, including more than 11 million children” (Feeding America, 2020, para. 2). I recognize you want to talk about the food. But you are talking with me, a critical hope theorist that is a learner, teacher, and researcher. Unfortunately, or fortunately however one sees it, my vocation leads me to bring awareness of unjust systems so that meaningful dialogue and empathic responses can be co-created. With that said, the USA is renowned worldwide for its variety, flavours, and culture. 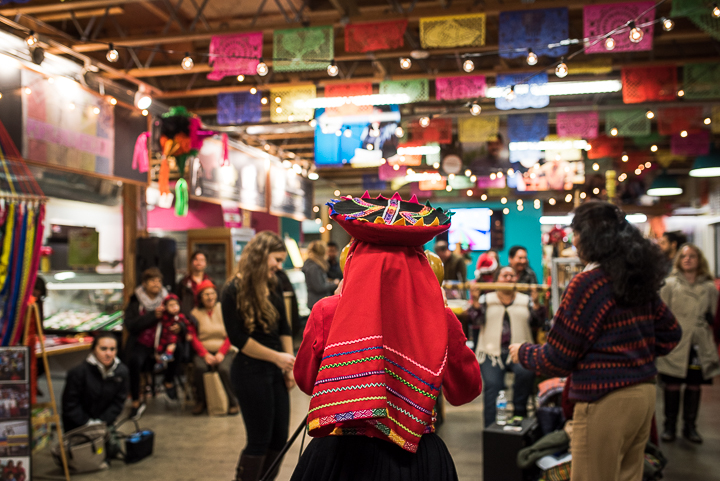 Despite, Portland being predominantly a White city with a reputation of progressive politics that has “perfected neoliberal racism” (Semuels, 2016, para. 6), it has developed several niches such as food carts, local micro-beer, and a multitude of vegetarian/vegan-friendly restaurants. Before COVID-19, Portland had over 500 food carts at any given moment. One pod of food carts that I am connected with is Portland’s Mercado. This is an “incubator model and economic development initiative of Portland non-profit Hacienda CDC [that] provides affordable retail space for businesses to launch and grow and is a hub for [Latinx] culture in Portland” (Hacienda CDC, 2020, para. 1). Food carts are where a lot of people start and eventually move to a brick and mortar buildings. Our most famous chef is Andy Richter of Pok Pok, a Thai restaurant.

I am (obviously) a foodie. I have never been to Portland nor Oregon. If I would come, what would be the most iconic foods I should try? And where should I head to feel the eating-and-drinking vibe of the town?

Voodoo Donuts would be a place that people would go to. We have artisan donuts, bread, beer, kombucha…and you pay extra money for the artisan name! We have so many places you can get delicious donuts. My dad is a Methodist preacher and Sundays he would get up early and take me to church early with him, because I was awake, and this happened to be in Portland and we would stop off at a Donut shop, Sesame Donuts. It is on a little hill and he left me in the car in our station wagon, which was an automatic. Evidently, I moved the shifter and put it in neutral and it started rolling down the hill. The intersection that I rolled into had an island just before it that stopped me. Otherwise, I would have rolled into the highway. I’ve had divine interventions with my father and that wasn’t the only one. I don’t have the memory of it because I was very small, maybe five, when it happened, but I do have the memory of my dad telling me and I do remember this story sometimes when I pass the Sesame Donuts.

What kind of comfort food did you enjoy in your family?

That may be different from other experiences because I am a vegetarian. My parents are from Ohio and liked meat and potatoes. But I was adopted and liked vegetarian food. Comfort food for me was always rice, which is very stereotypical, being an Asian person. Or pasta would be my comfort food when I was little. My Mom was a very good cook. She came from a German background and knew how to do the pot roast and German cooking. Here is another dad-connected thing about food. The United Methodist Church does not do wine for their Eucharist. So, we would have grape juice, that was left over and have popcorn and watch movies. So we were always excited when there was grape juice leftover. When I was little it was mandatory to have family dinners and I loved it. I think it is very important for people to have. You would turn off the radio and actually have conversations. That is a tradition I’ve carried on because it’s a time to reconnect. A lot of people do not do that anymore in the United States. When I was adopted, I arrived at a Chicago O’Hare airport and of course, I was a malnourished toddler (19 months). My brother had a whole box of Ritz crackers and he fed me a whole box of it in one setting. Now, Ritz crackers have always been a bonding, cool moment between my brother and I.

It seems you were not accustomed to drinking wine or other spirits?

I was not a drinker, even when I was an undergraduate student. Again, I was a stereotypical Asian who just studied in college. I met wine and discos in London for the first time. It was the first time that I really travelled. I had had drinks here or there but in London, they saw me as a cheap drink. Just a little bit of Cider and I was gone! Still, we do visit drinking places in Portland. There are micro-breweries all over the place. That is what Portland is known for as well. Portland and outside of Portland would be a foodie paradise. My neighbourhood was written up by Sunset magazine as a foodie Mecca. It used to be a middle-class immigrant neighbourhood but now it has become gentrified.

Food carts, food markets, annual outdoor events… it seems you folks are really enjoying eating outside. Why is that so in a rather unwelcoming climate?

It is temperate. Usually 20-25 C and rainy and dreary but we are known for food carts. They cover an area of 1/8 mile. You will see a variety of carts, and they are very good and they are also immigrant oriented because it is pretty easy to start a cart. JoJos French fries are ginormous. They are a cart that deep fries massive Idaho potatoes and my husband Jason really likes it. He is from Idaho so he feels like a kinship with JoJo’s potato cart. They have 15 dipping sauces. That is one of the things you will also see is the excessiveness of artisan things. It is not just ketchup – it is artisan ketchup! We have a shop in South West Portland that again has artisan whiskey, but you need to have a membership. If you have lots of money, you have so many places to go and to eat. My favourite is bread and cheese. There is lots of artisans and speciality cheese in Portland. You’ll be spoiled if you come here.

You are vegetarian. We will not tease you about that, as we tease only vegans (joking). Is Portland veggie-friendly?

Yes, incredibly! In fact, it is more vegan friendly than vegetarian friendly. We have so many vegan restaurants and they are quite good. That is why I am pretty spoiled. When I travel to other places, sometimes I can only find one thing on the menu I can eat. Portland is very outdoorsy. There is a lot of hiking and biking. A lot of people are environmentally friendly, so not eating meat is considered to be better for the environment, much more than for health reasons. We have coops that have plots of land, namely neighbourhood gardens. We have a lot of folks that have their own gardens. We have a lot of CSAs (Community supported agriculture), and a lot of bees. My husband and I have our own garden that Jason cultivates. We care for fruits and veggies and make jam and pickle. We also make wine. We are very stereotypical Portland people, driving a Subaru which is also very stereotypical.

In times of Covid-19, you stay much indoors. How does it reflect on your cooking? Do you like to experiment in your kitchen?

Jason lost weight when we were dating because I was cooking. I am a terrible cook! And the reason I am a terrible cook is because I like to experiment. Instead of putting a spoonful of Thai curry sauce in a meal, I will put a whole can in. Jason is a wonderful cook. He is an engineer, so he follows directions and he is marvellous. But I am an artist, and 90 per cent of the time I cook it turns out really badly! There is something quirky about me: I don’t cook but I love kitchen gadgets. Like, I would buy something that helps strip kale. I like gadgets that help me pretend that I am actually cooking! And mind this: I had the ability to fall asleep anywhere. When I was little, I would fall asleep standing up. When I was tired, I couldn’t determine if I wanted to eat or fall asleep, so there’s a picture somewhere of me sleeping in my spaghetti! I have to add that I travel a lot and when I do, I am mostly drawn to mama's cooking!

You are of Korean descent. Is this noticeable in your cooking? What would be your favourite Korean dish?

Jason makes Kimchi. I have a Kimchi story for you. In Portland, when I was little, we went to a Korean restaurant. Portland has a little Korean town. We go to the restaurant and they give my dad Kimchi. For a mid-western, meat-and-potatoes-bland-food person, my Dad tried it and it was too hot. So, they made him a ‘baby’ style with less spice. From the time I was little, I didn’t think I could handle Kimchi because my Dad couldn’t. Even though I loved spicy food, I never thought I could eat kimchi until I was in Chicago working with women victims of assault. I befriended someone who was Korean, and we went to a church kitchen. She said “open your mouth” and she popped in Kimchi, and it turned out to be one of the hottest Kimchis you could have. It took 15 years to learn I could eat Kimchi, but I still do not like Kimchi with fish sauce. Dol sot bibimbap is my favourite Korean food –its burned rice and it’s an acquired taste. It’s just really tasty. The way I learn culture is through Mamas kitchens, so everywhere I travel I am very interested in it. I think so many of things about the culture you can discover through food. So I have been invited into a lot of places that lots of people wouldn’t get to experience, because I am interested in how people cook food.